Last month's selection for my ladies' book club was An American Bride in Kabul by Phyllis Chesler. Everyone is supposed to bring a food or beverage item that somehow relates to the book of the month.  Being The Tea Mistress, I naturally offered to bring tea.

I was originally planning to make some sort of an Afghani version of Masala Chai, because I have a lovely memory of walking around South Street in Philadelphia with my husband several years ago and popping into a little cafe on a side street.  The owner of the cafe, who was from Afghanistan, asked us if we would like some chai.  I said yes (because it's one of my favorite types of tea) but my husband said no (because it's not one of his favorite types of tea).  The shop owner replied, "Ah! That's because you have never had mine! This will be the best chai you have ever tasted!"  And off he ran into the back of the store.  He was gone for a good fifteen to twenty minutes and we were looking at each other, wondering if we should leave.  (This was in the days before Smart Phones, so you can imagine how bored we were with nothing to do but talk to each other!)  Finally he returned with two large, steaming hot cups of an incredibly delicious chai! My husband promptly declared it the best chai he had ever tasted.

It was with the memory of this tastebud-tantalizing experience that I searched the Internet for Afghani chai recipes.  I was especially looking forward to trying this one: http://www.food.com/recipe/afghan-tea-an-authentic-family-recipe-286617 . Alas, my attempt to replicate the delicious chai of my Philly memory was thwarted by the lack of milk in my refrigerator and the lack of time to run to the store and get more!

Luckily this Wikipedia entry saved the day: https://en.wikipedia.org/wiki/Kahwah and Plan B was put into motion!  As you can see, the "Preparation" section does not contain an actual recipe with proportions, nor does it specify which type of green tea to use.

I surmised that a gunpowder green tea would be a logical choice, since that's the type of tea used in Moroccan mint tea.  I also figured that its strong flavor would stand up well to the sweetness of the other ingredients, in the same way that the tartness of Granny Smith apples works well in many desserts.

Although the webpage recommended a samovar, I don't own one yet. Instead I decided to prepare the tea in my Turkish double-boiler tea kettles, although I didn't do it the traditional way (e.g. making the tea itself in the smaller top pot and steaming it over the larger pot) because I wanted to make the tea in a container that I could transport easily to our book club hostess's home.  I came up with the solution of preparing the tea directly into the larger kettle.

Now, normally when I prepare tea for book club, nobody drinks it. I assumed that they'd mostly be drinking coffee since it was a Sunday brunch time of day.  Therefore I decided to make 6 cups of tea and have it "tested" by my husband and me prior to transporting it.

Here's the recipe I came up with, based on the rough guidelines in Wikipedia:
6 cups boiling water
6 teaspoons of gunpowder green tea
1 cinnamon stick
1 cardamom pods, cracked open with mortar & pestle
4-5 threads of saffron
6 rosebuds (from Vietnamese tea shop in Houston)

Bring water in kettle to rolling boil. Add tea (in muslin bags) and all other ingredients. Simmer for five minutes. Turn off heat.

I poured the tea into my Turkish tea glasses (because I don't have any Afghani tea glasses) and served it with a sugar cube (for me) and honey (for my husband).  He loved it so much that he drank two glasses of it! I enjoyed it as well.  Despite the photograph below, my dog Lilly did not actually drink any of the tea.

I wrapped up the kettle containing the remaining tea and carefully transported it to book club inside of a large stockpot.  I brought with me a set of six Turkish tea glasses and spoons as well as a box of sugar cubes.

To my surprise the tea was a big hit!  I wasn't expecting anyone to drink it, but I think the novelty of the delicate-looking tea glasses and spoons intrigued the ladies.  They drank every last drop of that tea and left me wishing I had made more! 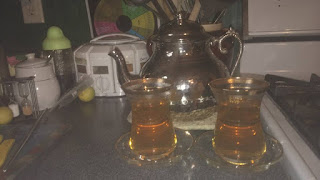 Please excuse the burners which really need to be scrubbed and repainted!  One of these days I'll learn how to crop a photo. 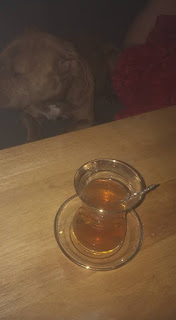