For Richer, for Puerh

This morning, when I went to prepare my customary cup of black tea with milk/cream/soy milk/coconut half & half, I realized I was out!  Since I needed caffeine and I wasn't in the mood for green tea, the only logical choice was puerh.

I happened to have some Maiden Puerh sitting around that was given to me at the annual coffee and tea exchange party I host for my Tea and Conversation with Friends meetup group ( http://www.meetup.com/Coffee-Tea-and-Good-Company/ ), so I thought I'd give it a try.

As you can see from the photos, the nice person who gave me this tea typed up a little info sheet on puerh for those at the party who were unfamiliar with this type of tea.  Puerh is a "post-fermented" or aged tea, which means that it goes through one more process after the oxidation and drying of black tea.  Like good cheese or a fine wine, puerh is fermented with bacteria, yeast and mold, which gives it a distinctive flavor that's not everyone's "cup of tea". Also like a good cheese or fine wine, puerh actually gets better with age.

Generally, when you are preparing puerh, you're supposed to do one to three rinses of it (presumably to remove mold and activate the flavor), but the instructions for this one did not call for a rinse. I hope I don't die! (If you don't see any more posts from me, assume the worst!)

I steeped this one at 200 degrees F for 4 minutes. The dry leaves had that distinctive puerh smell that reminds me of compost tea, or my kitchen when I forget to take out the trash.  By contrast, the flavor of this puerh is actually rather mild and smooth, with only a hint of that "compost pile" flavor.  As you can see from the photo, the liquor has a rich, coppery color.  The woodsy notes are quite pleasant.
A second steeping produced the same forest floor flavor, albeit milder.  I am going to save the leaves for a third steeping, so stay tuned! 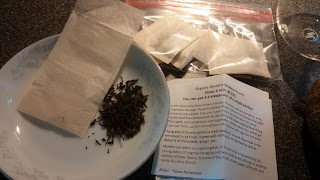 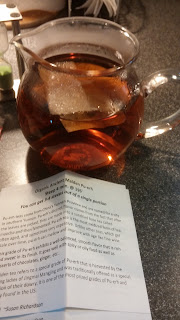 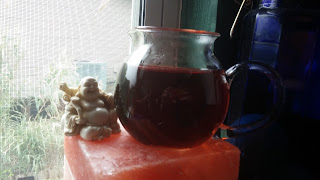